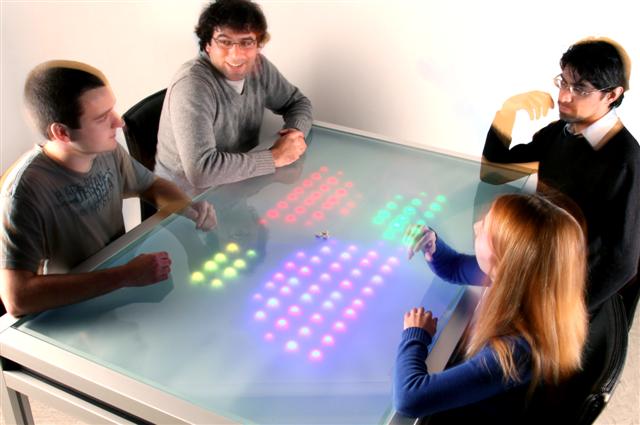 Reflect is a meeting table equipped with an array of 8x16 LEDs and three microphones in its center. The microphones separate the sound input into channels corresponding to each of the particiants. Two kinds of information are extracted: the amount of speech for each participants, and their involvement, based on the prosody of their speech. This data is visualized on the LED array. More details can be found on the project webpage of Reflect.

Reflect is the thesis project of Khaled Bachour. On my arrival at Craft, I helped him design and develop the third generation of the tables. This provided me with experience in signal processing, hardware interfacing, and the deployment of system as robust and autonomous as possible.

The third generation of Reflect also introduced the need of a user input, to allow them to change between modes and visualisations. One of the design goals of the table was to remain as seamless as possible, explaining the LED display, less disruptive than a high resolution screen. I proposed and implemented the use of the microphones as “buttons” to be scratched ; the system could recognize resulting sound as an input, and know from which of the three microphones it originated.